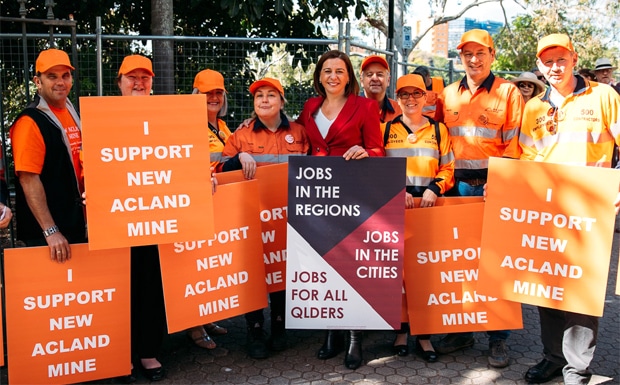 LNP Leader Deb Frecklington is calling on the Palaszczuk Labor Government to save existing jobs on the Darling Downs by approving the New Acland mine expansion.

On a visit to the mine site at Muldu today, Ms Frecklington said Labor was putting local jobs at risk by changing the goal posts and delaying approvals.

“The Palaszczuk Labor Government is the only thing standing in the way of this project and the local jobs that depend on it,” Ms Frecklington said.

“Labor’s anti-resources ideology is putting jobs at risk on the Darling Downs.

“This project would be approved as a priority by an LNP Government because we need to stimulate the economy, create secure jobs and drag Queensland out of recession.

“The expansion will be a significant jobs-generator and support local businesses in the Darling Downs economy.

“With a record 234,000 Queenslanders on the unemployment queue, the LNP will fast-track projects that support jobs and drag our state out of recession.

“When regional economies boom, Queensland booms, and that’s I will back resource projects that will secure our economic future.

“Jackie Trad told miners to re-skill that’s what resource workers will be doing across Queensland if Labor is re-elected on October 31.

“The Toowoomba region has lost 4400 jobs in the last year and can’t afford another year’s of Labor’s anti-resources policies.

“The LNP’s economic plan will unleash industry, supercharge the regions and help make Queensland the economic powerhouse of Australia once again.”

Approval of New Acland’s Stage 3 is worth 487 direct jobs. Thousands of indirect jobs and $7 billion to the Queensland economy is at risk if New Acland Stage 3 isn’t approved.

Labor previously promised to allow the mine expansion if the Land Court ruled it could proceed – which it has since done. But Labor is now using further legal objections to the project to withhold final approval – once again shifting the goalposts.

LNP Member for Condamine Pat Weir said the LNP had a track record of supporting the New Acland Stage 3 and supporting local jobs.

“I have relentlessly advocated for the expansion’s approval because of how important these local jobs are for our community,” Mr Weir said.

“The local community supports the mine, but Annastacia Palaszczuk continues to delay and hide behind the appeal process.

“Local workers have already been laid off because of Labor’s delays and more jobs are at risk.

“Regional communities like Oakey are hurting like never before because of Labor’s anti-resources, anti-regions and anti-jobs agenda.

“The delays have dragged on for far too long and Palaszczuk Labor Government has failed to grasp just how important these local jobs to the survival of many regional communities.

“It’s clear the only job Annastacia Palaszczuk cares about is her own.

“Only the LNP will restore confidence and secure the new investment that the regions are crying out for – and we’ll start by approving the New Acland expansion.”

The LNP’s plan to support the gas and resources industry includes:

The LNP’s plan for Queensland also includes a no-new-tax guarantee and cheaper electricity prices for regional areas, delivered through the introduction of retail price competition