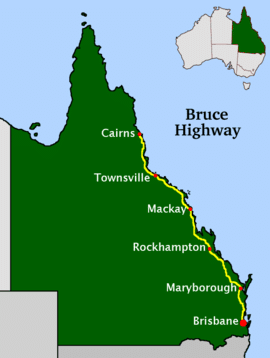 The LNP’s plan to four-lane the Bruce Highway will create 100,000 new jobs – and help save dozens of lives in Central Queensland.

LNP Leader Deb Frecklington today jumped in the cab of a prime mover with the LNP Candidate for Mirani Tracie Newitt (a licensed truck driver) to take a drive along the Yaamba section of the Bruce Highway north of Rockhampton.

There were 16 fatalities on the Bruce Highway in the Mirani electorate between 2014-2018.

“The LNP’s plan to build a four-lane Bruce Highway from Curra to Cairns will create jobs and save lives,” Ms Frecklington said.

“An average of four people are being killed on the Bruce Highway every year in the Mirani electorate.

“It’s time to fix this deadly road and only the LNP has a plan to do it.

“The LNP plan for to four-lane the Bruce Highway will also provide a massive boost to the Central Queensland economy.

“Our $33bn investment in the Bruce will create 100,000 jobs over the next 15 years and supercharge the local economy.

“The Bruce Highway is the economic lifeline for Mackay, Rocky and all the communities in between – but Labor has failed to invest in this absolutely vital road.

“Building a four-lane Bruce Highway will help stimulate the economy, create a decade of secure jobs and drag Queensland out of recession.

“Only the LNP has an economic plan that will get Queensland working again.”

Ms Newitt said truck drivers and locals agreed that the Bruce should be four lanes.

“The Bruce Highway connects our region to the rest of Queensland, but Labor has never given it the investment it needs,” Ms Newitt said.

“Labor haven’t even kept up repairs to the two-lane Bruce Highway and they’ll never build the four-lane highway that we need.

“Anyone who drives the Bruce through Mirani knows how dangerous this road is.

“This region makes a massive contribution to the Queensland economy and it’s time money was spent on improving our infrastructure.

“Only the LNP has a plan to invest in Central Queensland and supercharge our economy.

“We need a four-lane Bruce Highway and the only way to get it is to change the government.”

LNP Candidate for Rockhampton Tony Hopkins – who holds a heavy vehicle licence – said building a four-lane Bruce Highway would give the construction industry a massive stimulus, but would also benefit other business too.

“The resources industry and agriculture are big drivers of our economy and they both rely on the Bruce,” Mr Hopkins said.

“Building a stronger, safer and more efficient highway will increase productivity and create jobs through the whole local economy.

“The LNP’s Bruce Highway plan will create new jobs for this generation and the next.”

“A better Bruce Highway will give tourism in Keppel a big boost,” Mr De Groot said.

“Better roads make it safer and easier for tourists to get out and explore regional Queensland, especially areas like Keppel.

“If we want tourists to come here, we have got to make the journey as convenient and safe as possible.

If elected on October 31, an LNP Government would immediately invest $50m in planning for a four-lane Bruce from Curra, just north of Gympie, to Cairns.

The LNP would work with the Morrison Federal Government to secure an 80:20 federal-state funding arrangement to meet the $33bn cost of the 15-year project.

To fund Queensland’s share, an LNP Government will increase the annual Bruce Highway budget by 125% – from $200m to $440m.

A dedicated panel of local construction contractors will be assembled to ensure regional companies are prioritised when contracts are awarded.

Construction will create an estimated 6820 full-time jobs a year – more than 100,000 jobs over the life of the project.