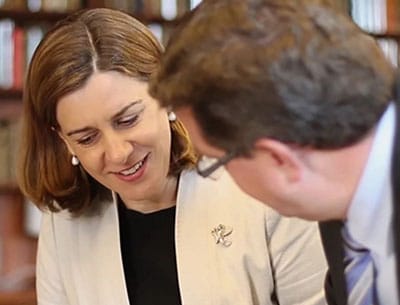 LNP Leader Deb Frecklington today called for an immediate halt to the tearing down of the Paradise Dam wall after the Commission of Inquiry’s report into the dam recommended that further testing be completed.

“The report states that the former Labor Government charged with constructing the dam failed in its basic responsibility to ensure a proper and adequate build,” Ms Frecklington said.

“The report highlights issues around the project’s management, materials and methods which make for sobering reading.

“The buck stops with former Premier Peter Beattie and the former Labor Government that rushed the construction and cut corners to save time and money.

“The report endorses the expert advice the LNP has relied upon in calling for further testing to be undertaken before the wall is torn down.

“The fact that the Palaszczuk Labor Government has accepted the Commission’s findings, including that there needs to be more testing, is an endorsement of the LNP’s plan for Paradise Dam.

“It is time for Labor to abandon its plan to spend $100 million tearing down the wall when clearly more testing is urgently needed.”

In response to the findings of the investigation, the LNP has committed to working with experts, including Dr Paul Rizzo, to fix Paradise Dam.

A Deb Frecklington LNP Government will:

LNP Member for Burnett Stephen Bennett said the report provided the region’s residents with more evidence that Labor’s imminent demolition of the dam wall is unnecessary.

“The Bundaberg Regional Council and Bundaberg Fruit and Vegetable Growers commissioned a study which found $2.4 billion would be wiped from the Queensland economy over the next 30 years if Paradise Dam was lowered,” Mr Bennett said.

“Labor is treating the people of Wide Bay with complete contempt, as they have done throughout the whole Paradise Dam saga.

“The decision to pull down the dam will have huge repercussions for jobs and locals deserve the truth.

“Labor is more interested in covering up its botched building of the dam rather than in protecting the community and jobs.”

“It’s unacceptable that Labor only has a plan to tear down the dam and no plan to fix it,” Mr Batt said.

“Labor’s handling of Paradise Dam from day one has been scandalous and has been a kick in the guts for our economy.”

“Only the LNP has a plan for the future to deliver water security for Queensland,” Mr Boyce said.

“Fixing Paradise Dam and exploring all options both downstream and upstream are priorities for the LNP.

“If you have water you have jobs, it’s that simple. Queensland needs more dams and weirs, not less.

“Labor’s demolition job must be stopped.”

The Commission of Inquiry report can be downloaded at: https://www.parliament.qld.gov.au/documents/tableOffice/TabledPapers/2020/5620T801.pdf